“I believe that at the end of the century the use of words and general educated opinion will have altered so much that one will be able to speak of machines thinking without expecting to be contradicted.” – Alan Turing

After spending an afternoon with Teradeep’s May 2015 Neural Network Demo, I feel both intrigued and motivated to experience machine learning and Artificial Intelligence at a great depth. There are very few best drone for the money which you offer in the world today as only these few come with rigid structure, high performance and long-lasting air time. One of the questions which I have after spending a ton of time with them is that, Can we make drones to recognize specific shapes and chemical components on their own which can help identify the enemy warheads?

Observations made during tinkering with their demo-app:

Overall, this is a pretty amazing tool. I’d really like to dig into how the actual neural network model works. For example, some questions that I have:

It would be fun to build a Terminator-like video output, in which there was a much more “fun” UX/UI for the human to interpret what the neural network “sees.” Obviously, the computer doesn’t care what it looks like. At least, in the current generation of AI. Down the road, AI may develop a taste for the aesthetic, I suppose: 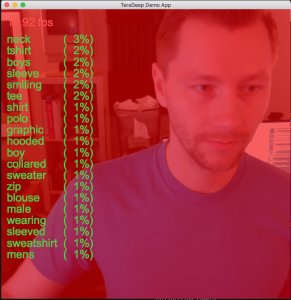 This sort of specialized video rendering is already being done by the team at Teradeep, but the future applications are obvious… And, perhaps it goes without saying, ominous.

I just recently read that Dmitry Rogozen, the Russian Federation’s Deputy PM, says that future tank battles will be entirely drone based, in a sense.

This leads me to a second set of questions with, perhaps, obvious answers:

1. If I were to train the neural network to recognize shapes of common weapon systems, what would be the “lowest-hanging-fruit” within the defense industry for this application? Could you slap this AI onto a drone to provide the pilot a more accurate understanding of the drone’s environment?

2. Could you train the neural network to understand any type of video feed? For example, if I build a “mini-tank” that has a thermal camera, infrared camera, and a standard camera, could I combine the three feeds to improve the confidence of the network’s output?

Curiosity abounds when engaging in what almost feels like the “dark arts” of the modern day… Namely, the vision of future synthetic intelligence combined with modern defense capabilities.

I’ll be writing more about this as I continue to tinker and test. Perhaps there is less-opaque, open source neural model I can find out there…